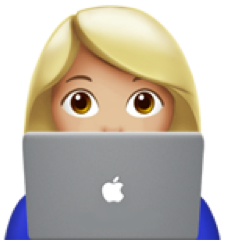 2019
Information Design
The aim of the project was creating a set of three brand-consistent and user-friendly infographic boards for the #2minutebeachclean campaign, displaying the data on litter collection extracted from the app. 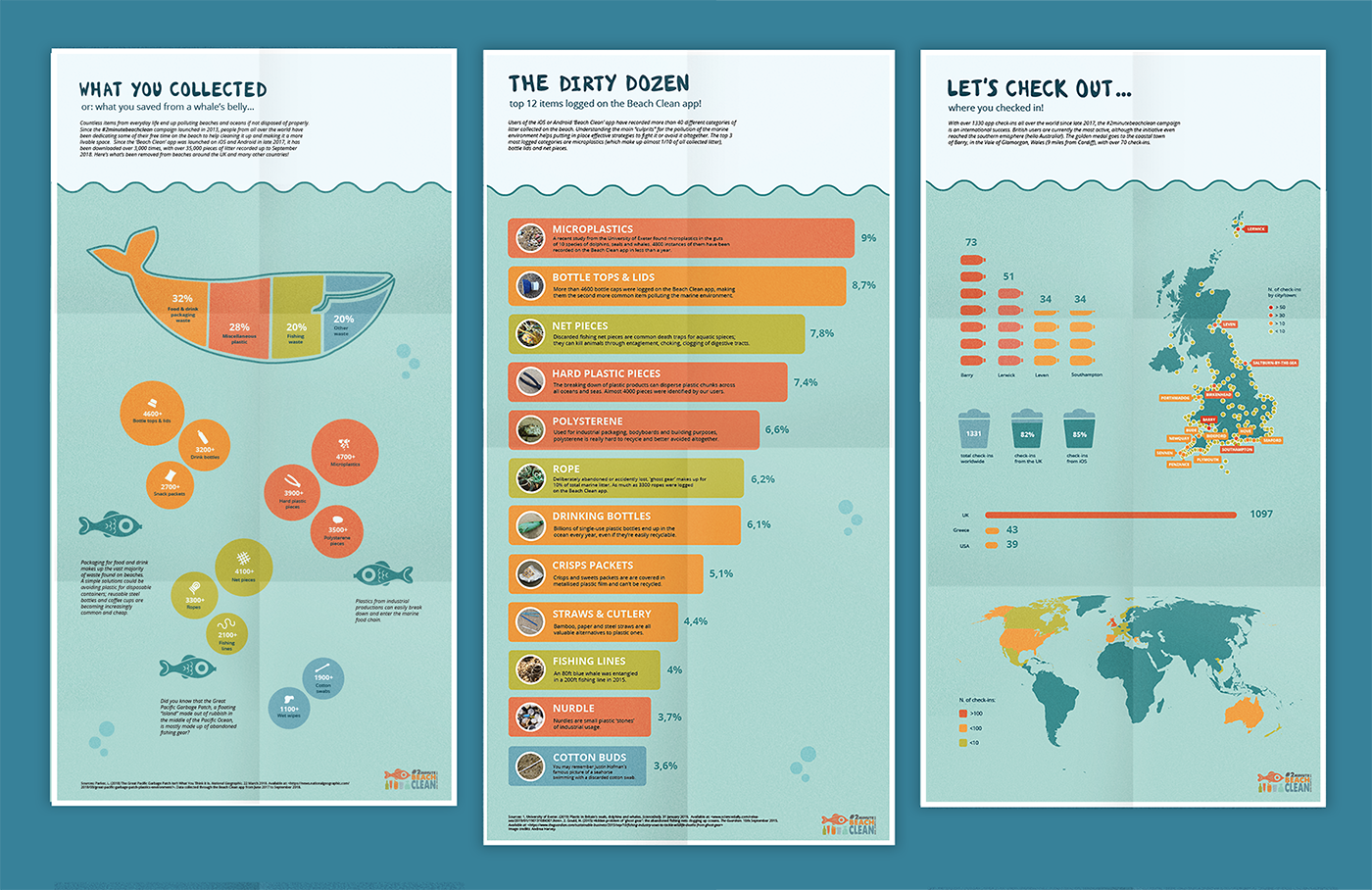 The first board provides an overview of the kinds of litter recorded on the Beach Clean app from June 2017 to September 2018. The waste was classified into 4 categories: food and drink packaging, miscellaneous plastics, fishing waste, and other waste. The "other" category includes a wide range of items that weren't common enough to constitute their own category.

In the lower part of the board, a top 3 of subcategories for every class of waste is displayed. 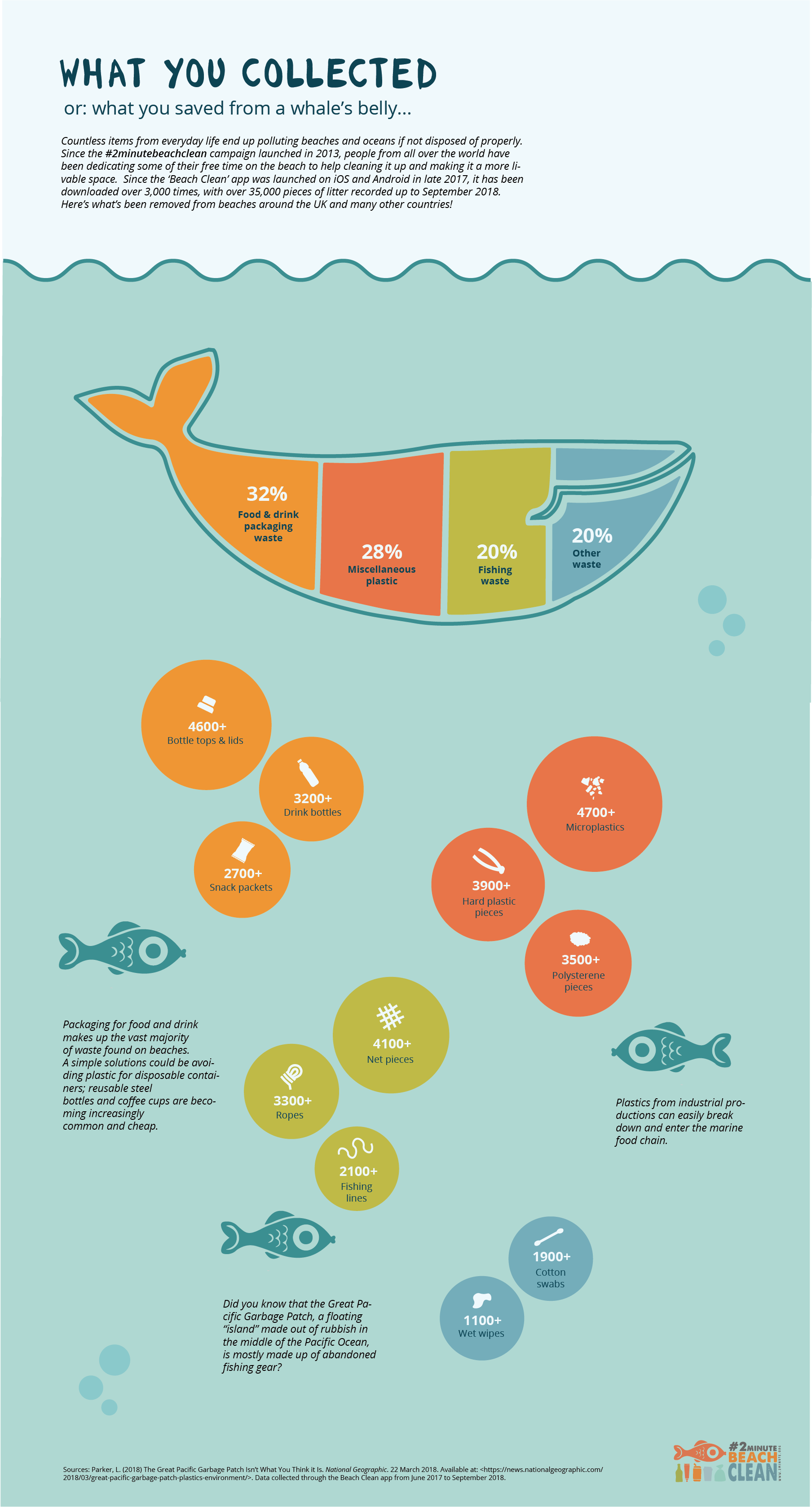 The second board goes into more detail in relation to the waste categories, identifying a top 12 of the most common kind of items. 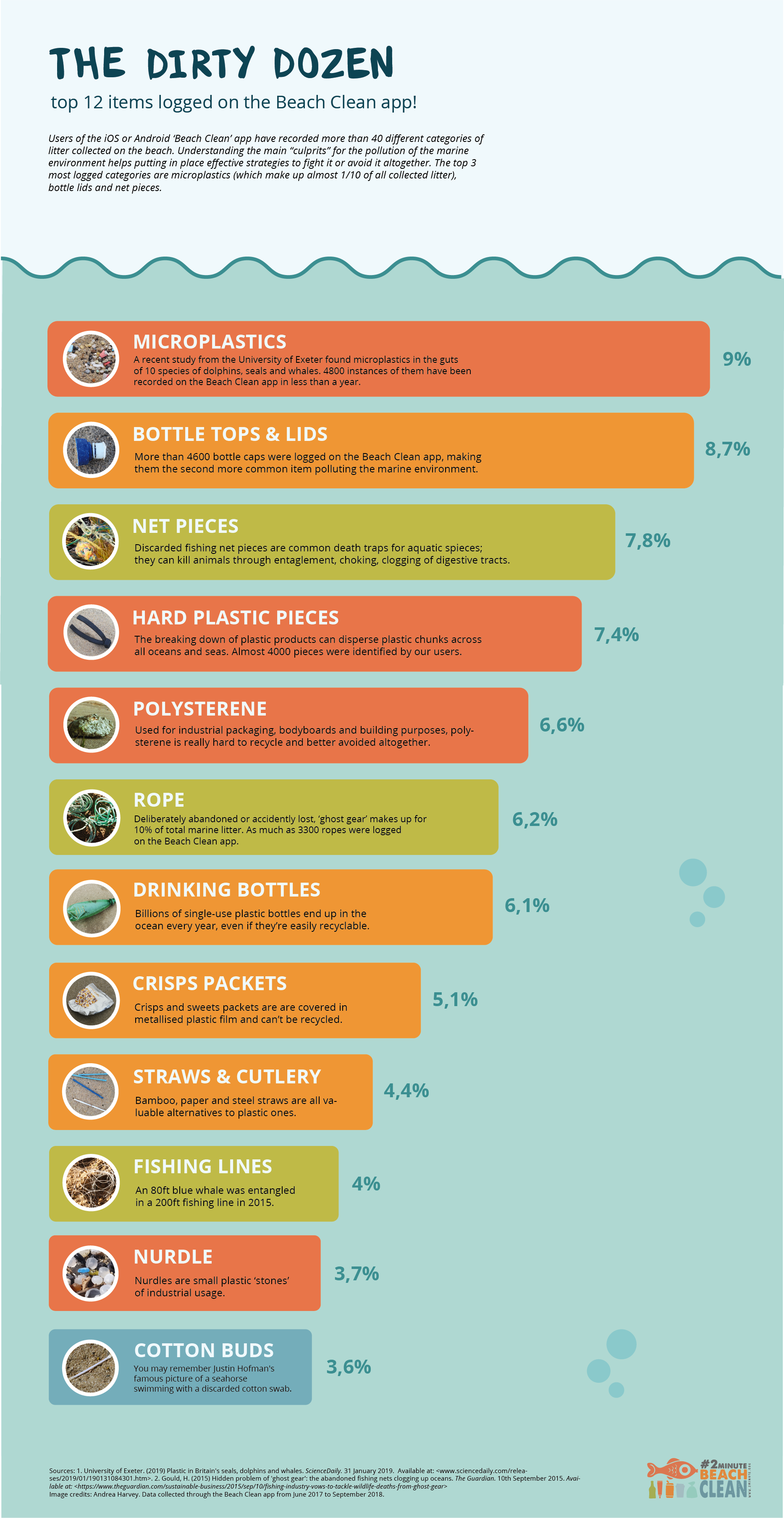 The third board is related to the locations where users checked in, either in UK or worldwide. 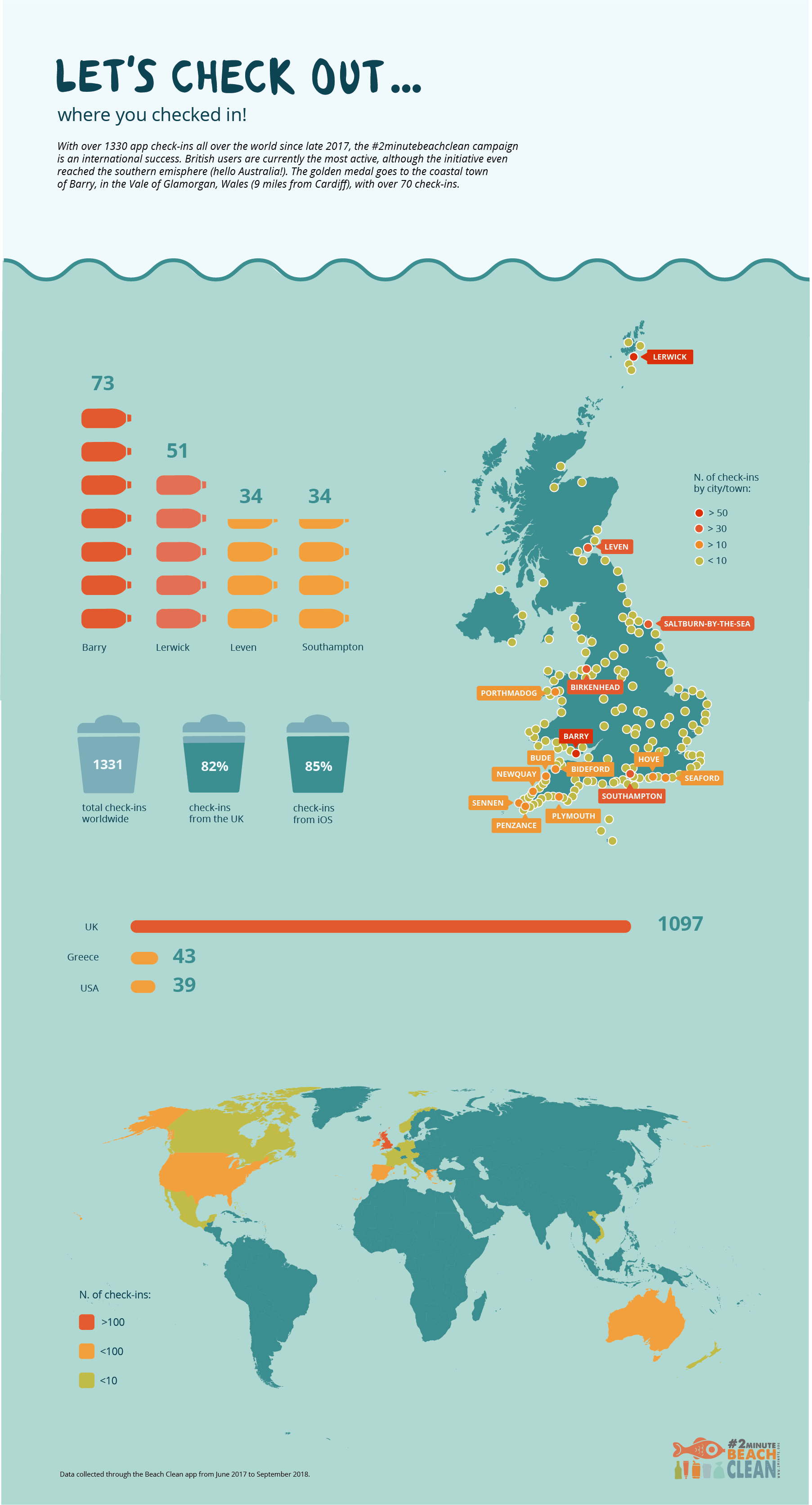 It was important for the infographics to be flexible and adaptable to different formats and promotional materials. Below you can see an example of how the board could be transposed into a brochure. 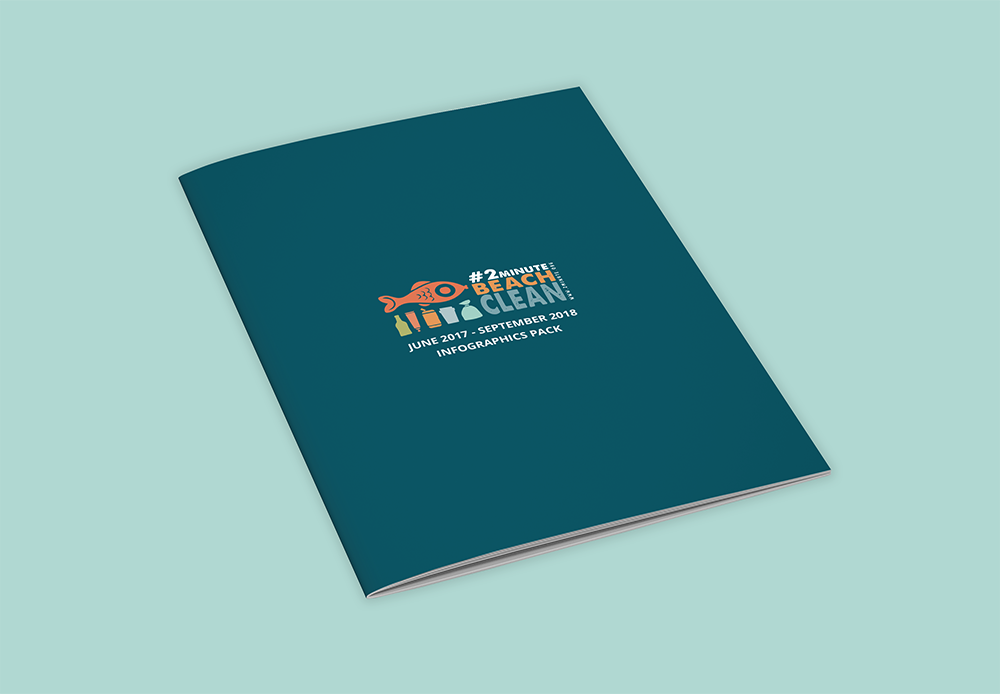 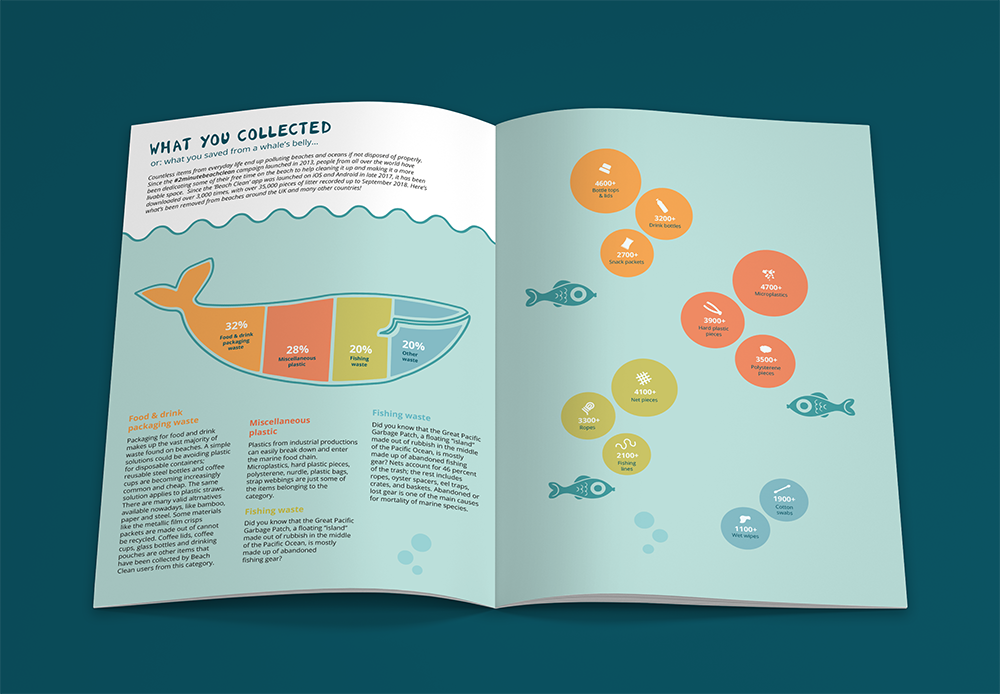 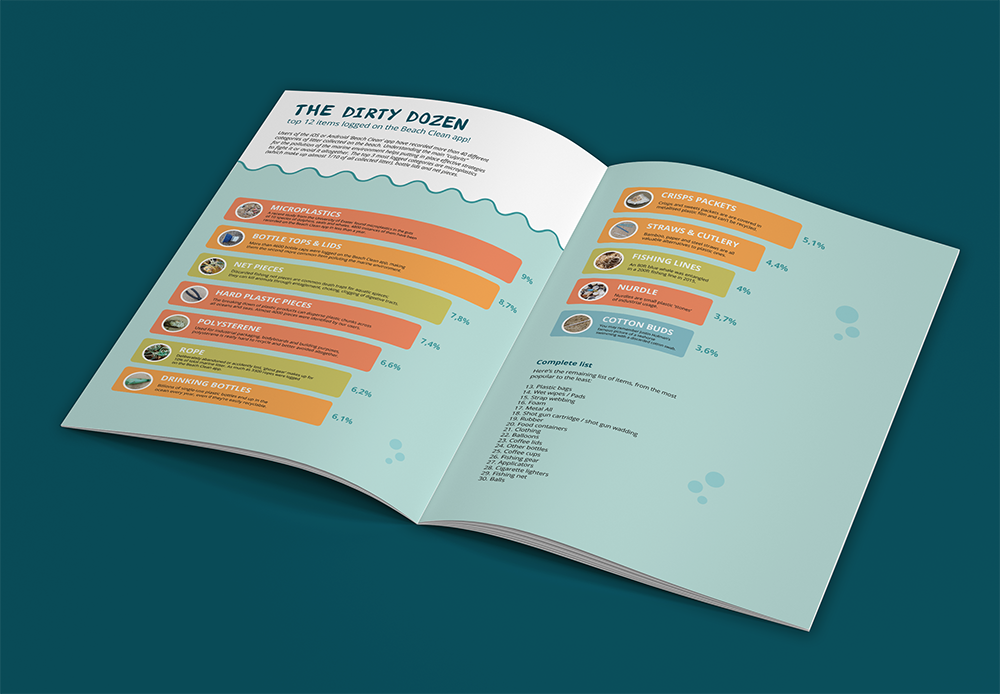 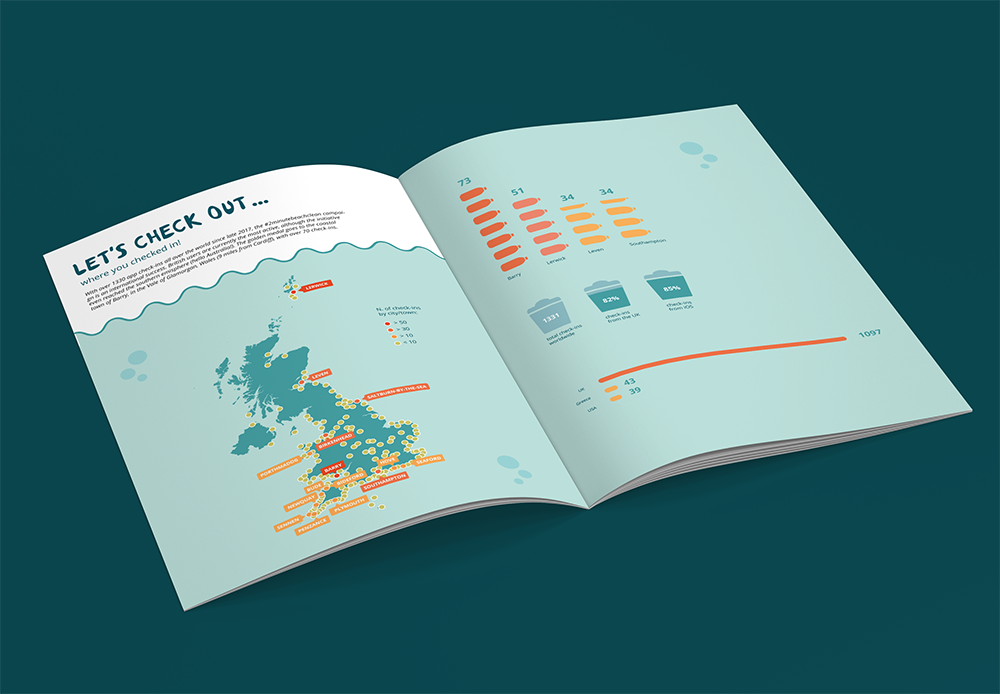 In order to try and build empathy with potential target users, three basic personas were created to reflect audience types for the infographics. The main features and demographics of personas were based on data provided by the organisation. 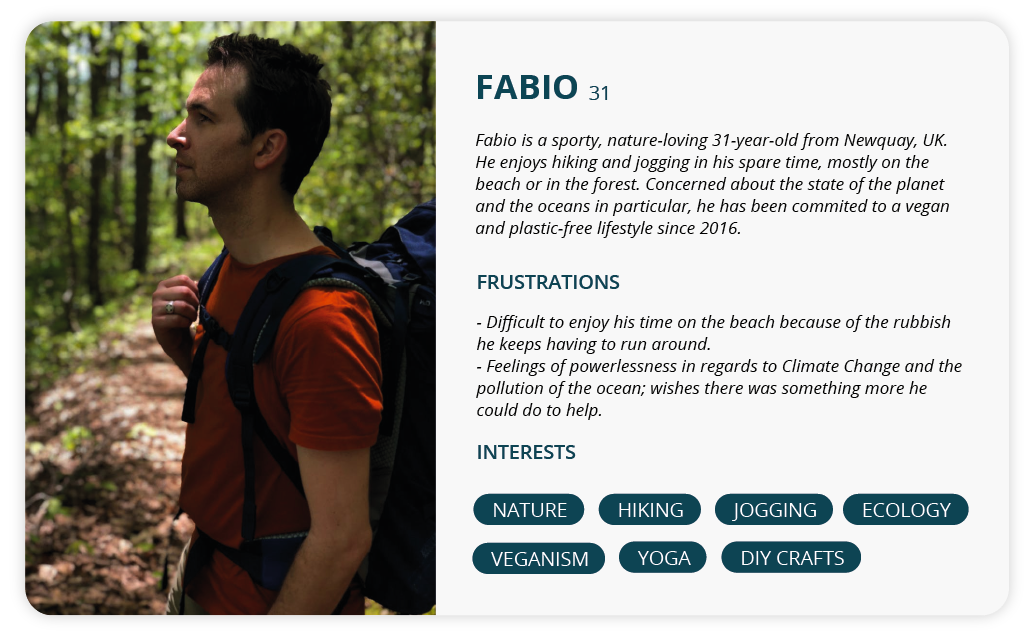 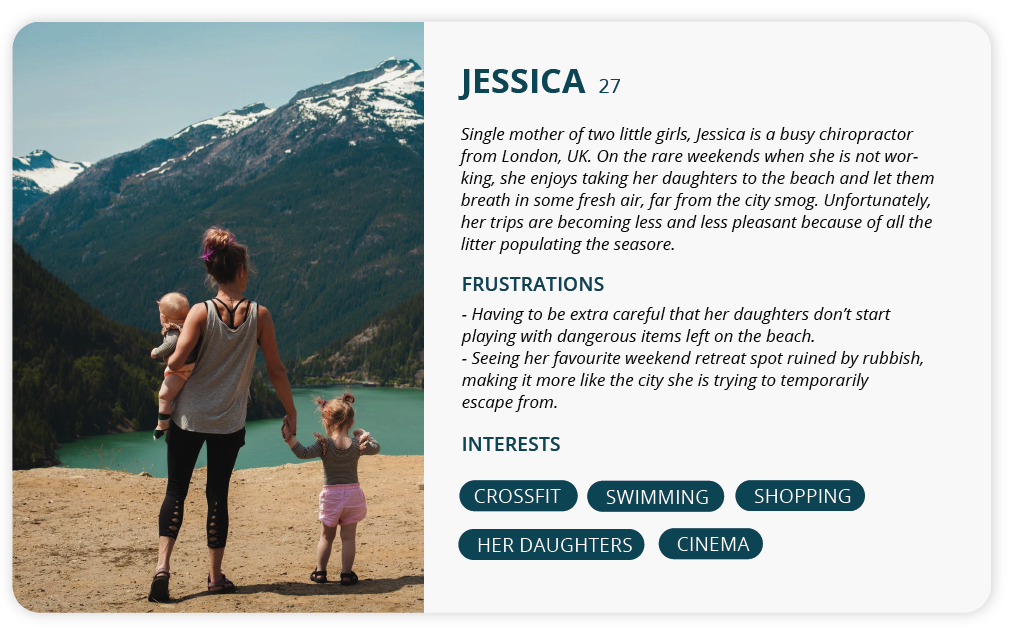 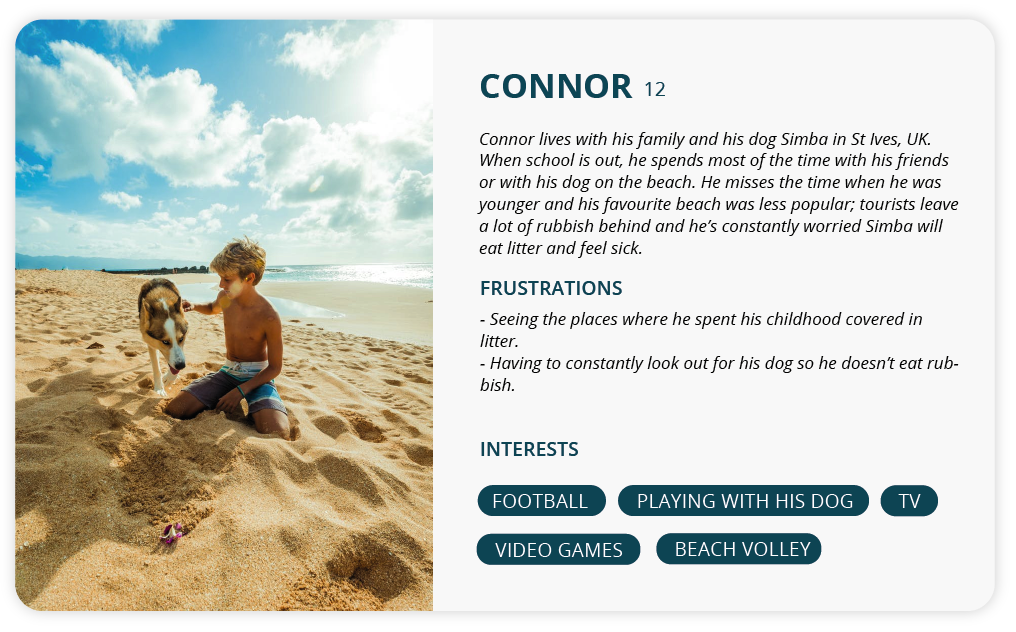 As part of my visual research, I investigated how the brand has been representing itself to the public so far.

The first point of my analysis was the logo, which depicts a fish alongside some garbage products (bottles, containers, paper cups, bags) and the name of the initiative (#2minutebeachclean).

As visible, the type has been treated with a texture to make it look stamp-like. The colours used are different shades of orange and blue, other than one shade of green.

The main font used for the copy is Open Sans. A custom handwritten font is employed for titles and taglines.

The main photographs used are “action shots” of people cleaning the beach. No stock photos are employed. For the website and for signs on the beach, other graphic elements used are arrows and icons. 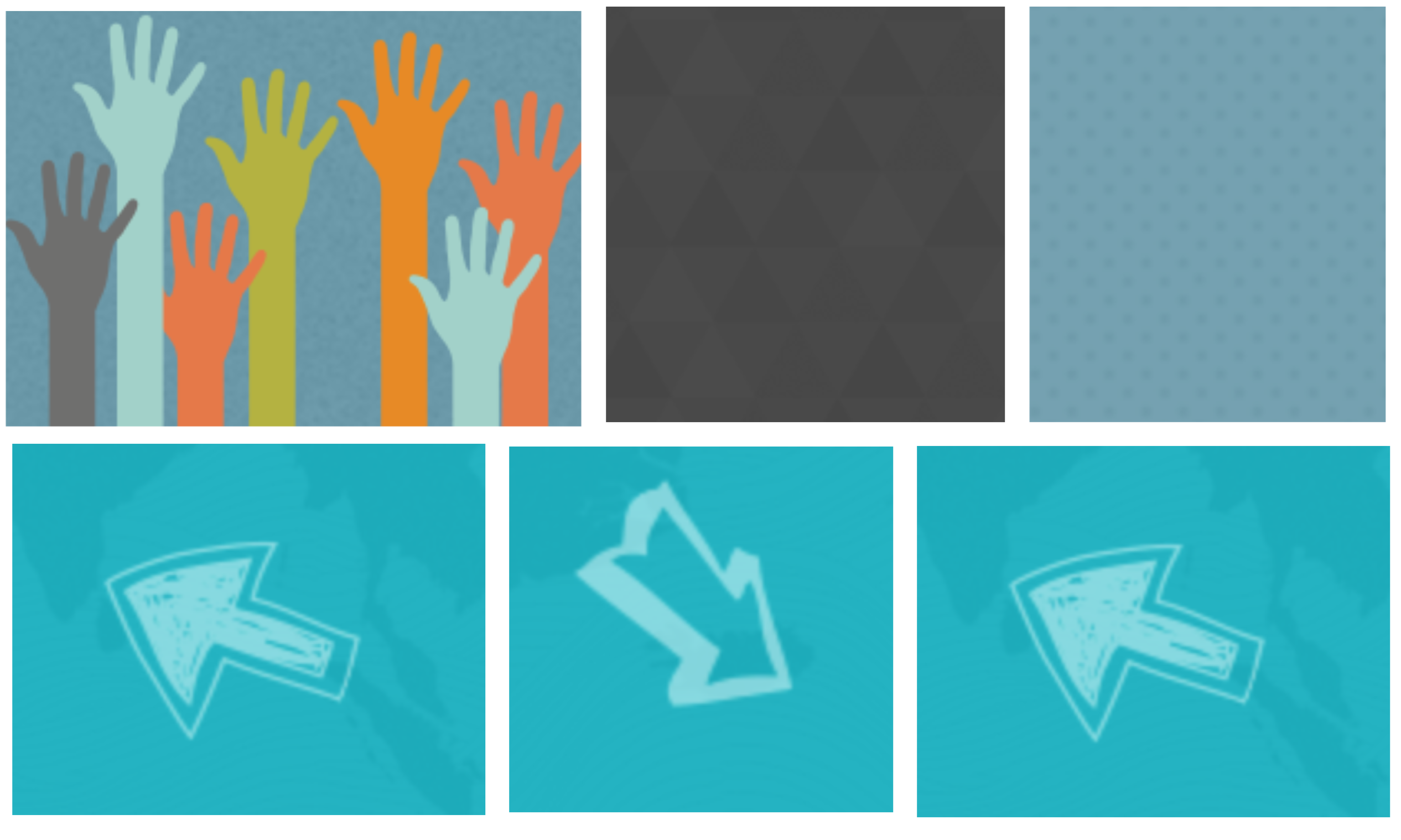 Vector shapes were inspired by actual images of objects collected. 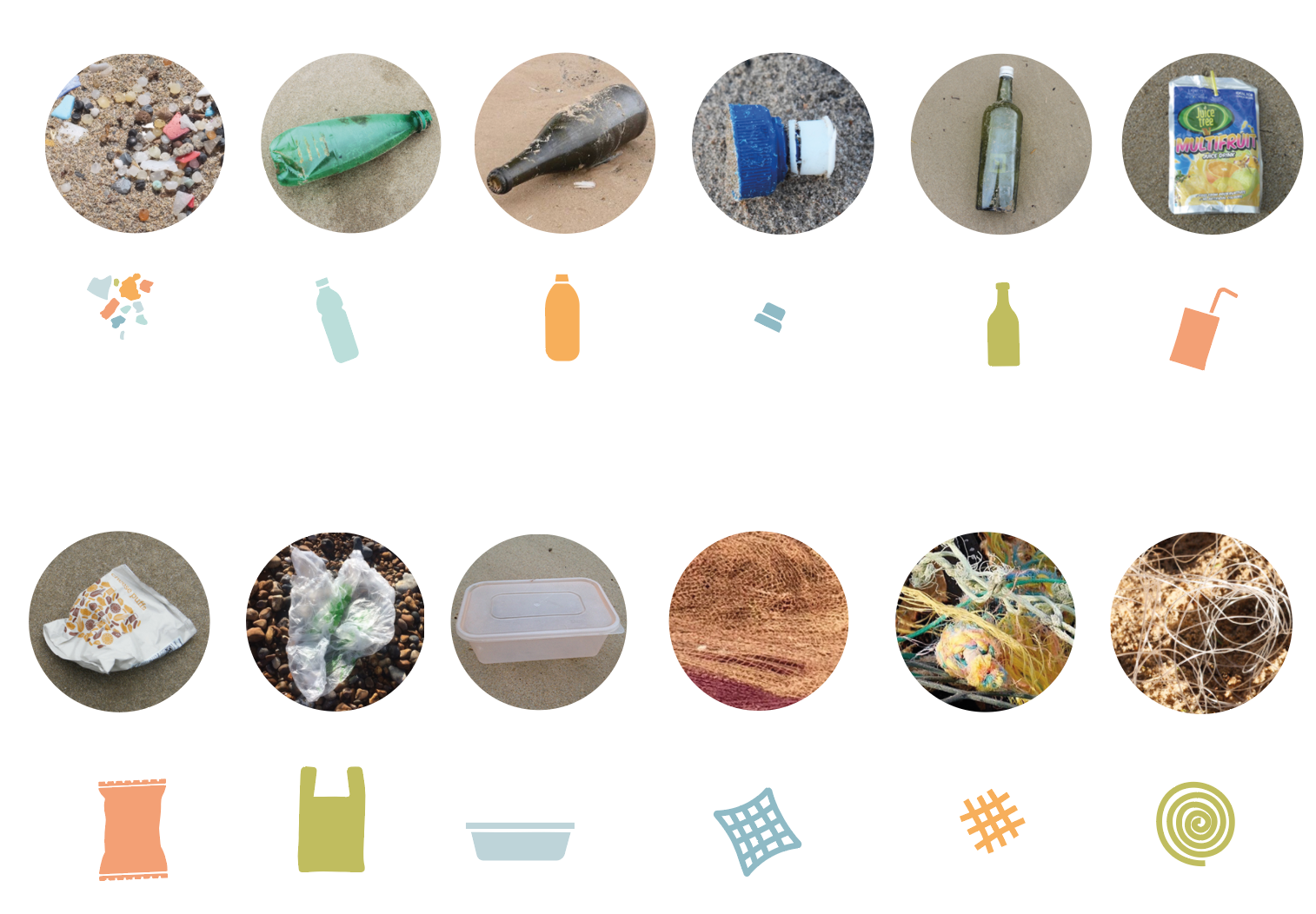 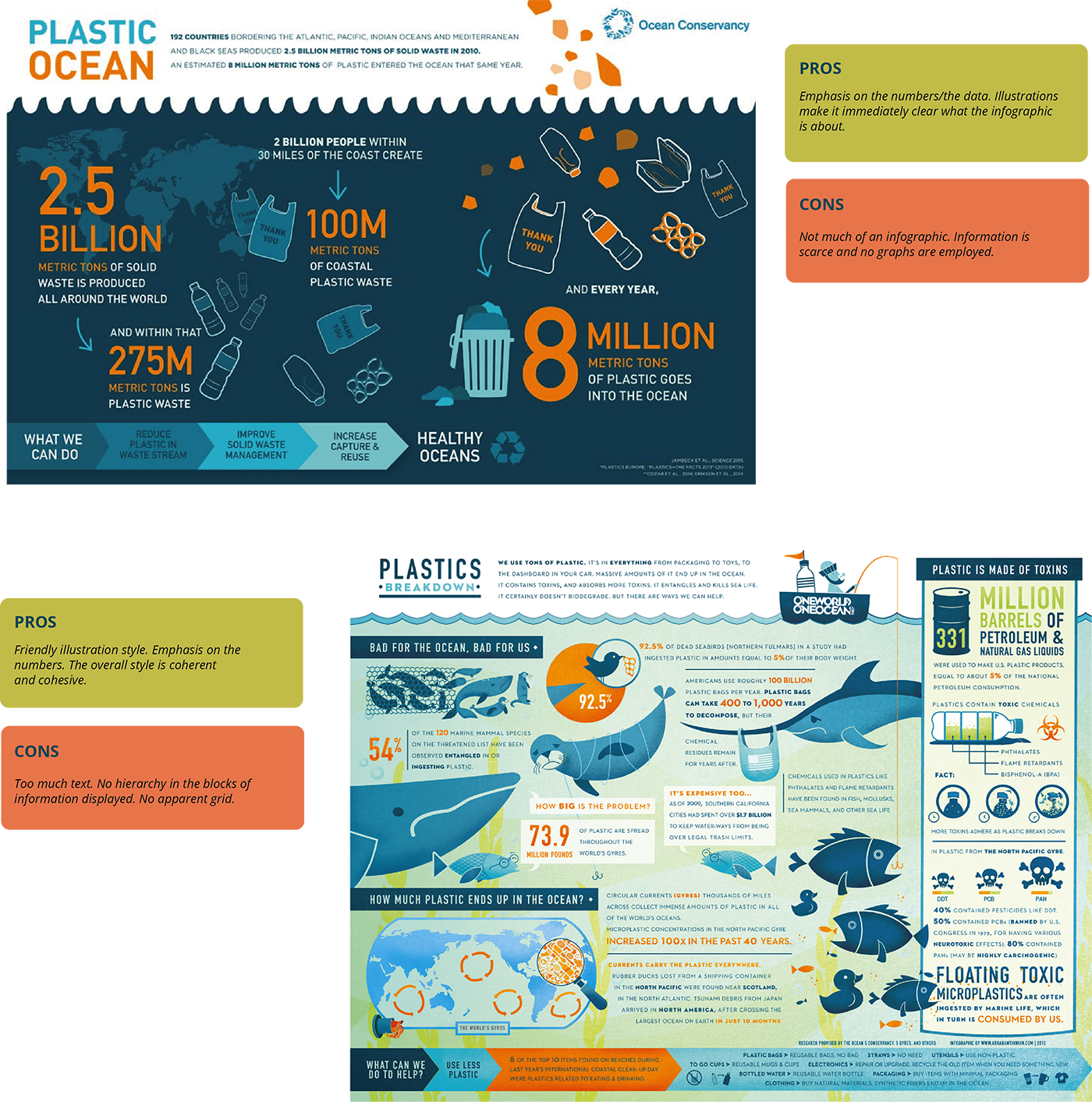 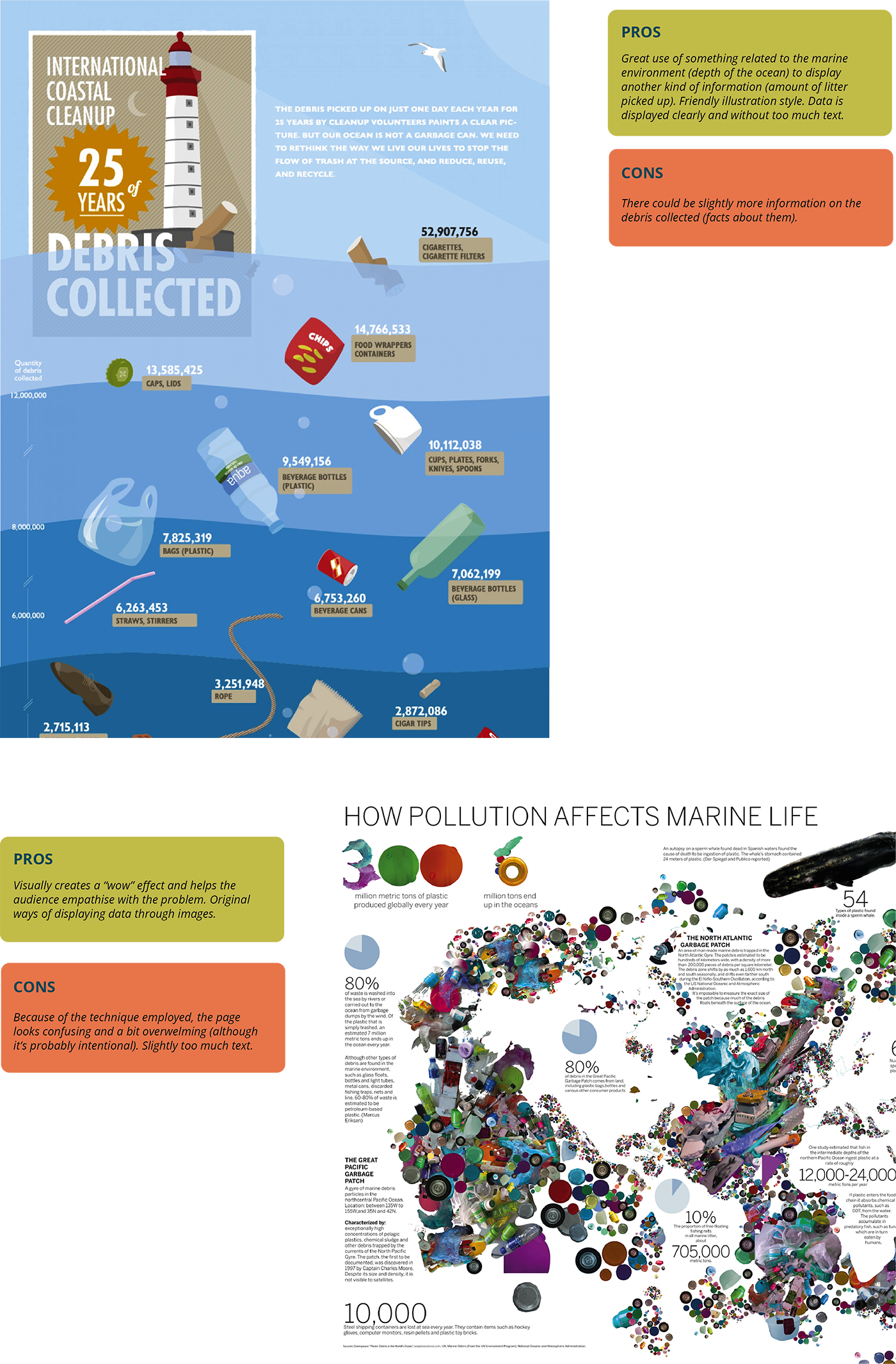 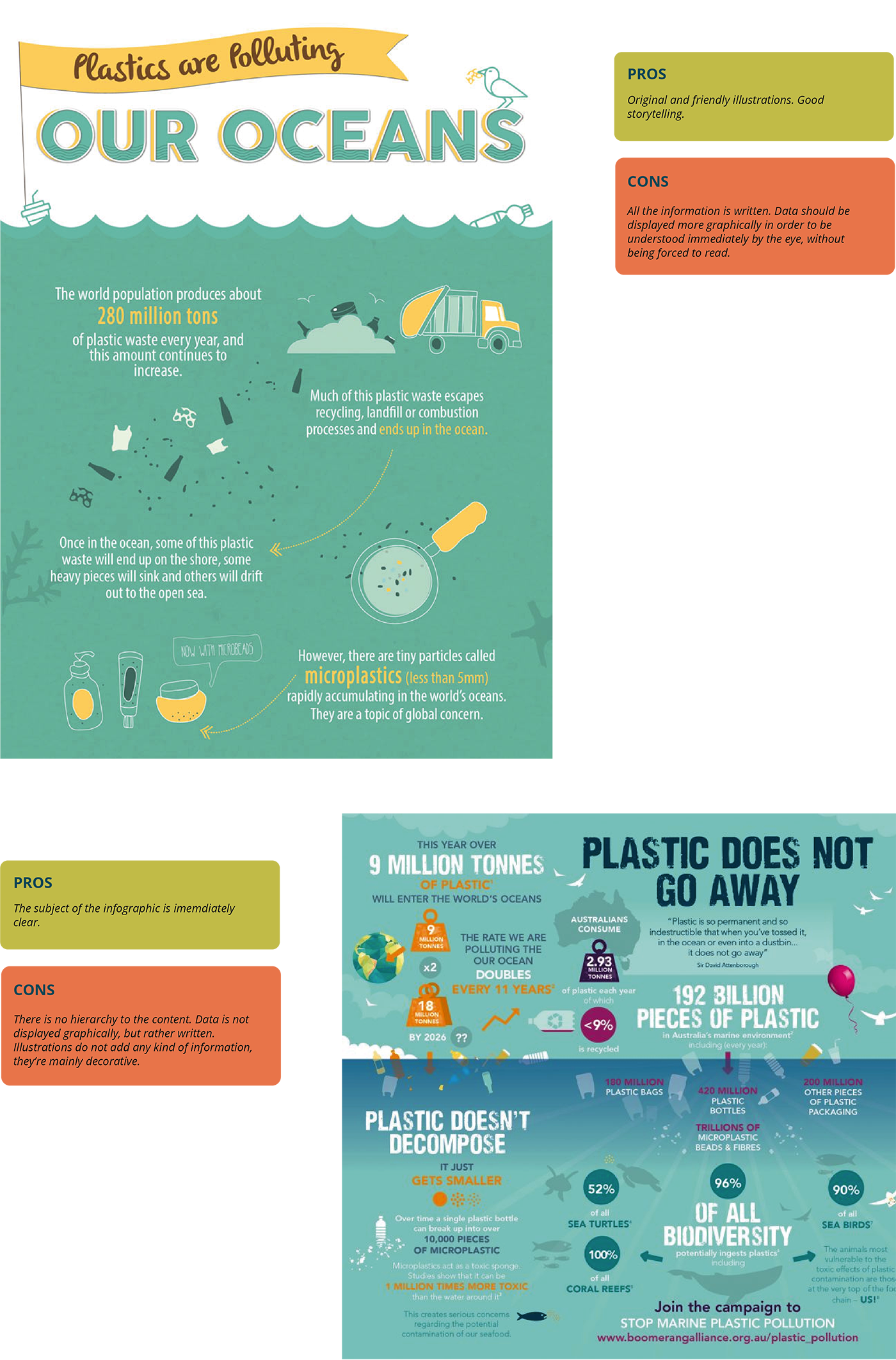 The data provided was under form of Excel sheets and it included:
- The kinds of litter categories collected by the users;
- Check-ins information (kind of litter collected, location, app platform used, timestamp, userid);
- Check-ins on Blue Flag beaches;
- Check-ins for the Street Clean initiative.

Considering the timeframe available, it was necessary to focus on a single initiative. The one with more data available was  the Beach Clean campaign.

The first step of the data analysis was converting the location coordinates into actual addresses: this was possible through a Reverse Geocoding script to be used on Google Sheets. The data was therefore imported in Google Sheets and the script run. 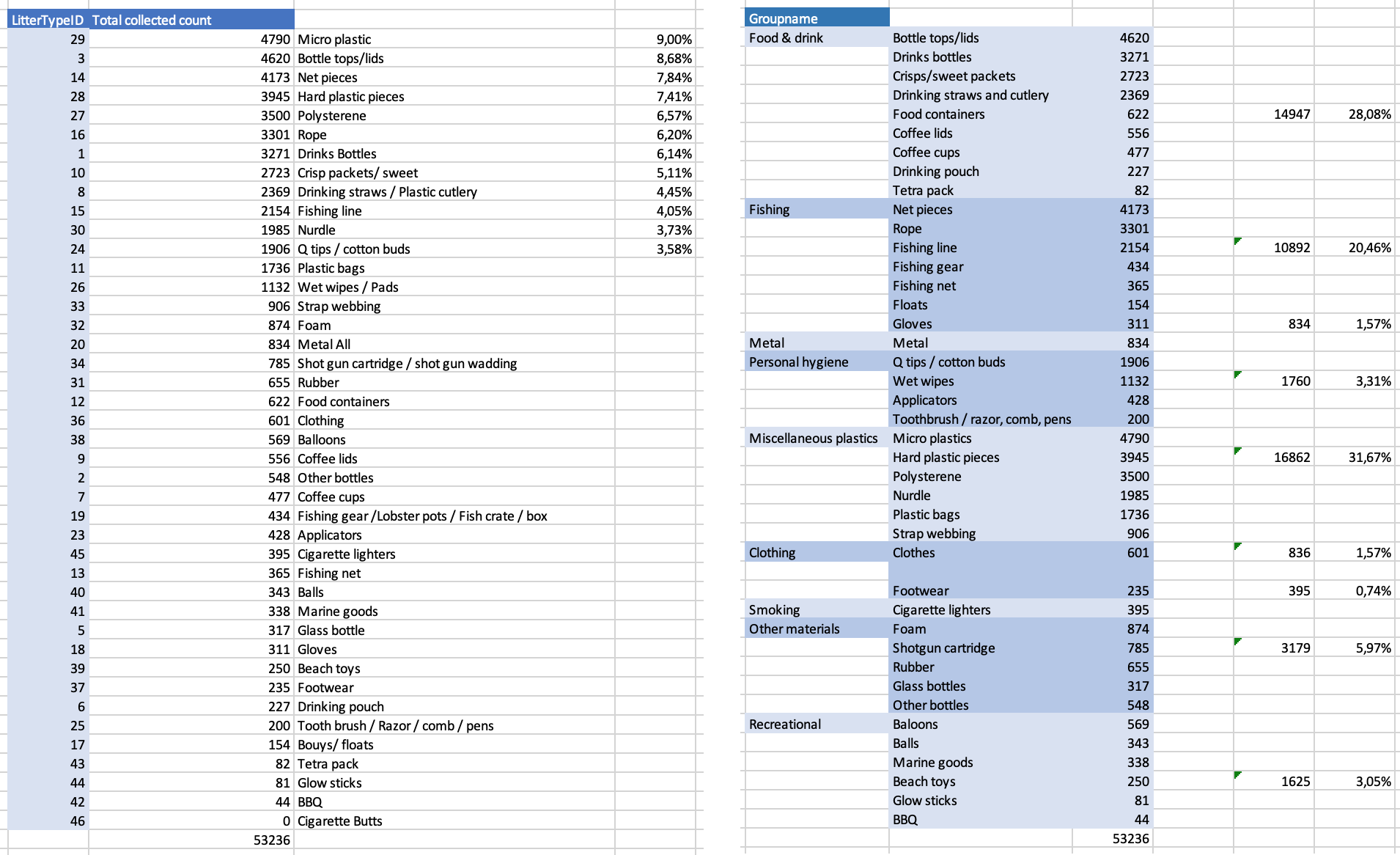 Having run the script, I could easily obtain an overview of check-in locations through the "COUNTIF" function in Excel. The same function was used to extract usage by platform and by month. 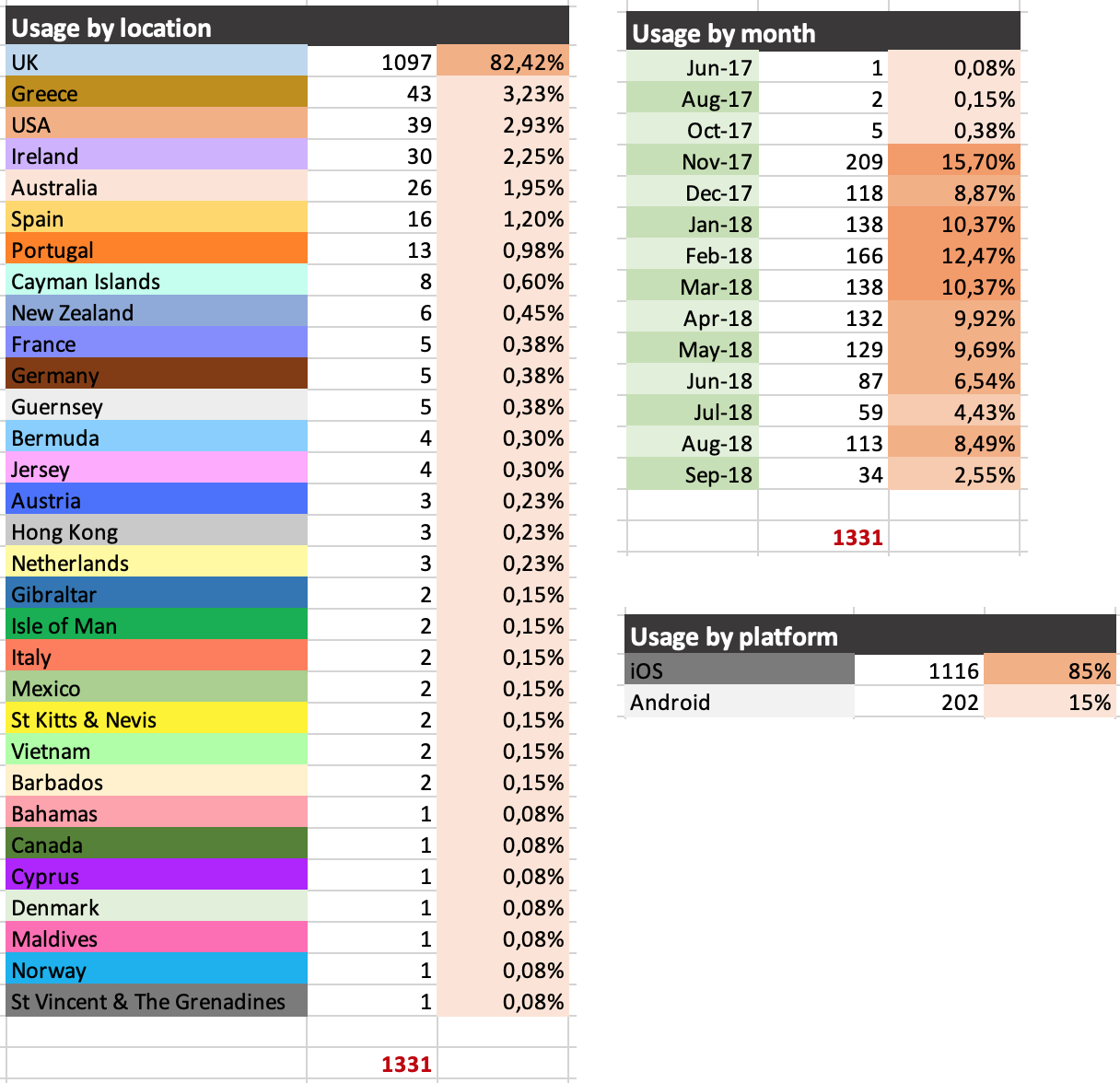 The kinds of litter collected couldn't be counted with the same method because of how the Excel sheet was structured. In fact, for every litter log, there were two separate columns: one indicating the type of litter collected, and one indicating how many instances of that litter type were recorded for that single log. Therefore, if I had run the "COUNTIF" function on the litter type column immediately, Excel would have counted every litter type just once, even if more items of that type were collected (because the information about the amount of items was registered in another column). The solution for this was using a script to duplicate every column as many times as the value in the "CollectedCount" column, and only THEN running the COUNTIF function on the LitterTypeId column. 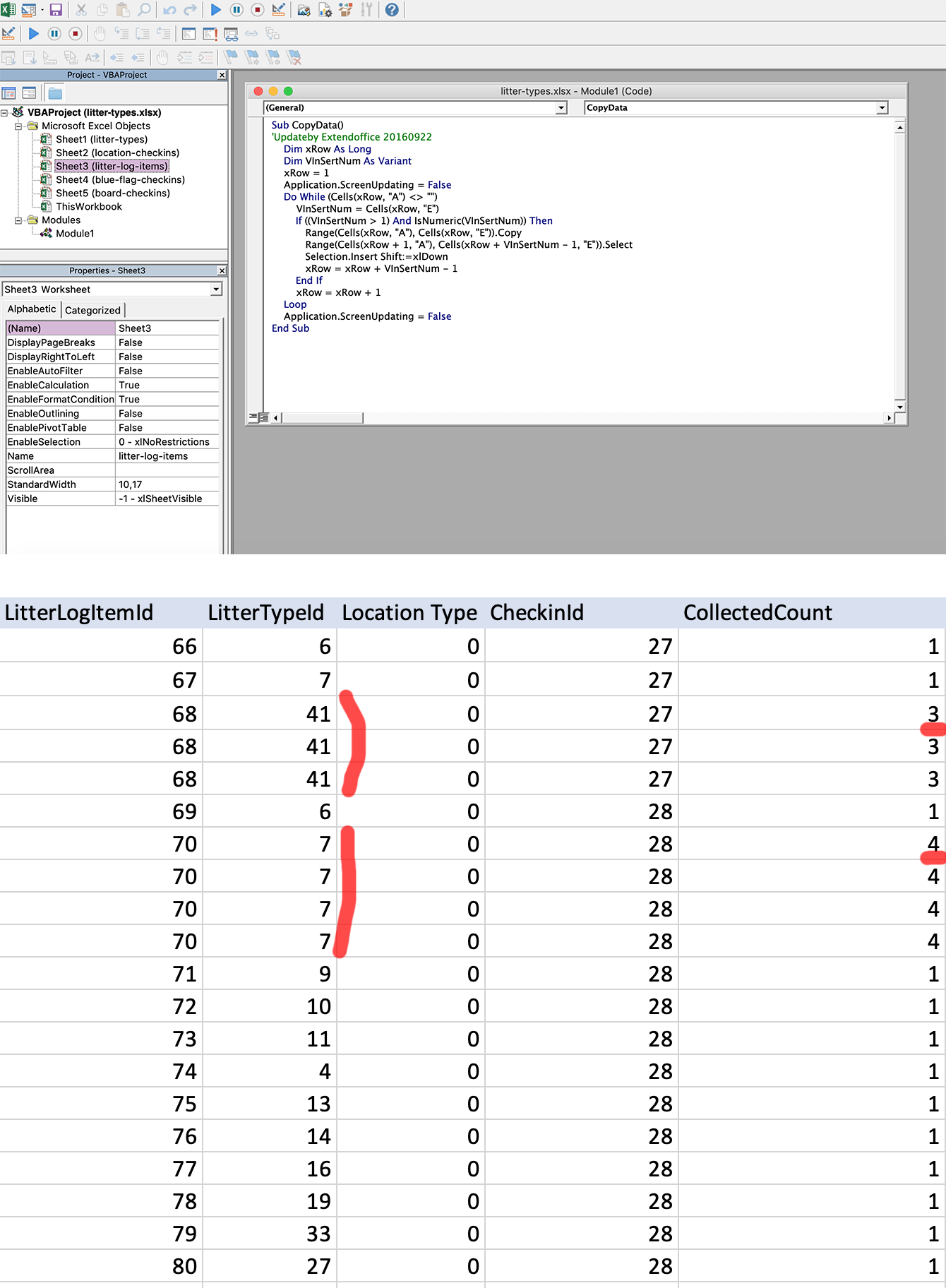 The procedure allowed me to extract information about the litter collected by users:

Finally, to visually display the checkin locations, all the coordinates were imported on Google Maps: 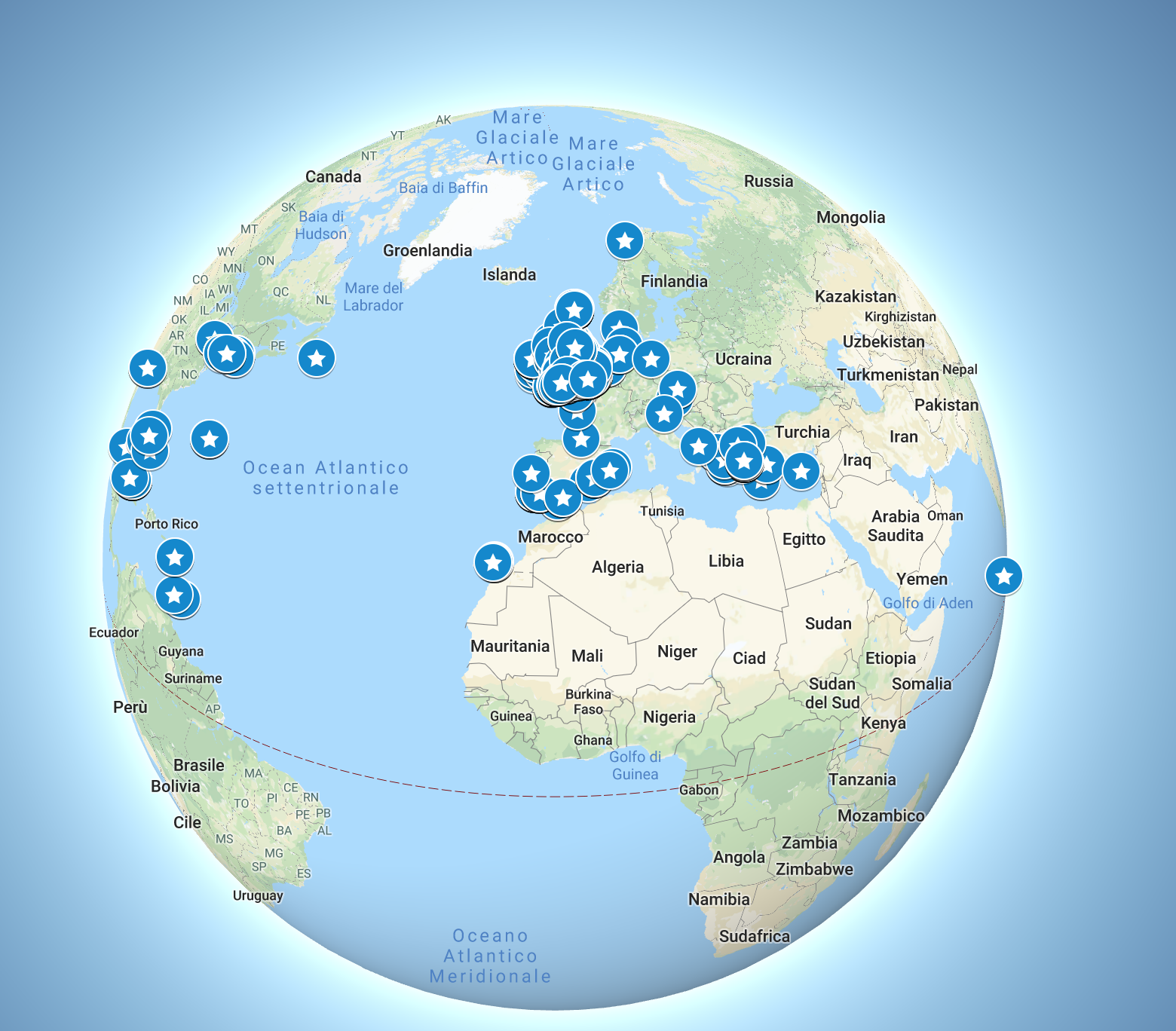